A Brief Look at the Last 90 Years

St. Sebastian Parish was founded on July 6, 1928, when the Rev. Hilary Zwisler was announced as pastor of a new parish. The first Mass was celebrated in rented space at the Rankin School gym on August 5, 1928. The new parish was established in response to a population boom in Akron, which from 1910-1920 experienced growth of more than two hundred percent. By 1928, Akron’s St. Vincent Church had again become too overcrowded, despite the establishment of the nearby parishes of St. Bernard, St. Mary, St. Paul, and St. Martha. In 1929, construction began on St. Sebastian Parish’s first building, a combined church and school. As it grew, the parish added a convent in 1950 for the Sisters of Humility who taught at the school, as well as a gymnasium in 1952, and the current church building, which was dedicated in 1960.

Since then, the parish school has added a junior high wing (1969), a science lab (2001), a technology/computer lab (2001), a school garden (2011), and an Innovation Lab (2017). In 2001, the convent was converted into classrooms for kindergarten and preschool students. At the time of the parish’s 90th anniversary, St. Sebastian Parish School had educated over 5,500 students, and St. Sebastian Parish boasted a thriving membership of more than 1,750 parishioner families.

In May of 2017, the St. Sebastian Parish Foundation, at the request of Fr. Valencheck, launched Cornerstone of Our Faith, a $1 million capital campaign to restore our beloved church to its full beauty and grandeur in time for the celebration of our parish’s 90th Anniversary in 2018. The Cornerstone of Our Faith capital campaign was just the first of many projects and events held by the parish to commemorate the parish’s 90th anniversary. Celebrations kicked off June, 2018, with a Mass of Thanksgiving celebrated by Bishop Nelson Perez. Other anniversary activities include a parish photo directory, the sale of commemorative items, the publication of a book of the church’s history written by pastor Fr. John Valencheck, and several festivals, concerts, recitals and parish gatherings. And finally, the parish hosted a 90th Anniversary Gala on November 10, 2019. 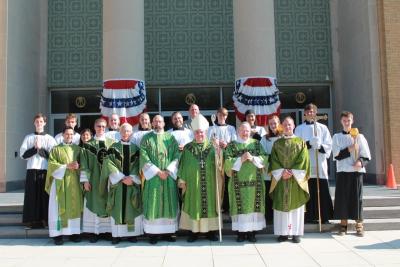 Below is an edited version of the article, "St. Sebastian Parish Celebrates 90 Years at Gala," published in the Winter, 2019 Alumni Newsletter.

St. Sebastian Parish hosted a celebration of the parish’s 90th anniversary at a gala on Nov. 10. The gala, which drew a crowd of 180 people, took place at Zwisler Hall -- the very site where the parish celebrated Mass in its early years until the current church was dedicated in 1960. The highlights of the gala included the attendance of several priests who served at St. Sebastian over the years, pictured below, who enjoyed breaking bread together and sharing stories of their time at St. Sebastian. Other highlights included a proclamation presented by Akron Mayor Dan Horrigan, a St. Sebastian parishioner, in honor of the parish’s anniversary as well as its role as a cornerstone of the West Akron community.

After enjoying dinner, guests were treated to a video featuring footage of the extensive Cornerstone of Our Faith church restoration project that was completed during this anniversary year. Much of the video was filmed using a drone to capture overhead images, from the soaring bell tower to the massive altar. Below is a link to the video, along with additional 90th anniversary information and pictures:

• the 90th Anniversary Video of our beautiful church;
• a list of donors to the Cornerstone of our Faith Campaign;
• the 90th Anniversary Gala Program, which includes a parish history and historical photos;
• photos from the night of the gala;
• the Anniversary Mass program;
• an archival document listing the “Good Crusaders,” otherwise known as many of the original members of the parish; and
• a link to a video recording of a song composed by alumnus John Kastelic ’82 that was inspired by the church restoration work.

The gala is part of the parish’s many 90th anniversary celebrations, which began June, 2018, with a Mass of Thanksgiving celebrated by Bishop Nelson Perez. Also in June the parish completed a $1 million restoration of the church, a major project that involved repairing and restoring every aspect of the church, from the pews, kneelers and statues, to the floors, doors and front plaza. Other anniversary activities include a parish photo directory, the sale of commemorative items, the publication of a book of the church’s history (publication details to be announced) written by the current pastor, Fr. John Valencheck, and several festivals, concerts, recitals and parish gatherings. Special thanks to Michelle Huber ’78 (parish director of marketing and PR) and Cathy Sivec (parish catechetical leader) for planning this outstanding gala celebration! 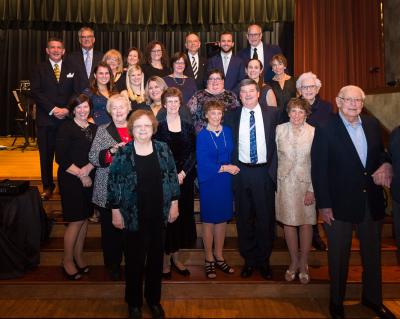 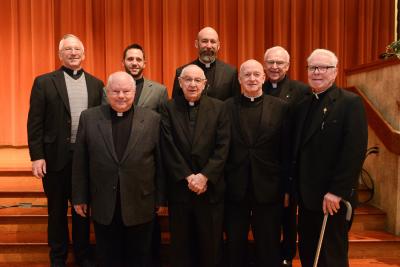