George Bachmann is a lifelong member of St. Sebastian parish and an alum of the school. He began his teaching career at St. Sebastian’s in the 1970’s, giving lessons as he completed his studies at the University of Akron. He became the first guitarist to earn a B.M. in performance at Akron. His college teaching career began in 1975 when he founded the guitar department at Cuyahoga Community College. He received a M.M. in performance from Kent State University and began teaching there retiring this past year after 31 years.

He is currently on the faculty of Cleveland State University where he teaches classical guitar and directs a guitar ensemble. During his studies his teachers included Jerry Willard, Joseph Breznikar and Christof Harlan. He has appeared in concert with the Canton Symphony Orchestra, Cleveland Chamber Symphony and the Kent State University Orchestra. He has also performed with the Miami String Quartet.

Bachmann’s students have go on to notoriety from coast to coast including Rick Stone of New York City, a performer and recording artist, Michael LeFevre, a well know guitar performer in the Pacific Northwest and Lino Allesio, composer/producer living in Oregon.

Mr. Bachmann resides in west Akron with his wife, Jannis. Together they are members of the St. Sebastian Parish Choir. 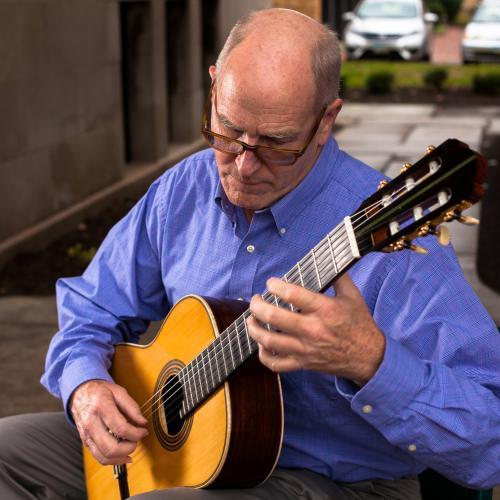